The Evolution of the Portable Restroom

How Did The Portable Restroom Start?

The industry as a whole began back in the 1940s in California at the ship yards.  The workers on the ships had to walk long distances back to the dock area to use a bathroom.  And as you would imagine, there was a significant loss of time on the job and thus they would get behind on the projects.  So the ship builders got together with the builders of the dock restrooms to design a portable/movable temporary unit on the ships so they would be closer to the workers.  A wooden structure was built with a small holding tank, and this was the very first portable toilet.  The concept became known as a time saver and soon spread to the construction industry and to event organizers where large crowds were expected. 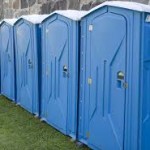 Fortunately, when you need portable restrooms in the Ithaca area, you don’t need to experience the rustic and rudimentary building of the ’40s.  Let’s look at what the early portable restrooms were made from and the issues involved with their upkeep.

Those first portable restrooms were made of wood and metal, were extremely heavy to move about, and unfortunately absorbed the odors and were basically impossible to keep sanitary.  Am sure you can imagine what that was like.

In the 1970s, fiberglass became popular for many projects and portable toilets were one of the first structures to be revamped using this material.  They were lighter than wood and easier to transport.

But, issues still existed.  The fiberglass toilets required more maintenance due to the brittle nature of the material.  In addition, fiberglass absorbed odors in the structures and holding tank, thus proving to be a poor choice of material.  Still, it was somewhat of an improvement over the wooden restrooms.

Now with this cleaner and more portable restroom option with the polyethylene material, the success of these units were excellent.  Although not a replacement for permanent facilities, it’s a handy and useful self-contained unit that is far easier to clean and keep sanitary. 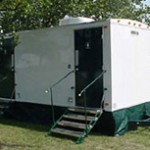 As part of the value of rented portable toilets, The Drain Brain cleans their portable toilets with a frequency based on the number of toilet users.  At service time, The Drain Brain sends a pump truck to the toilet site whereas the driver sanitizes the inside of the toilet’s holding tank and structure and “recharges” the holding tank with fresh deodorizer.  The driver refills supplies (toilet paper, soap and fresh water), leaving customers with a clean portable restroom. The waste is then transported for proper sanitary disposal.

With the large number of locations, events, job sites, and even family reunions/weddings, the increased use of portable toilets in Tompkins County has skyrocketed.

The Drain Brain has a wide  selection of portable restrooms in the Ithaca area and can arrange to have your event well covered with enough units to suit your expected number of guests.

Regardless where your event is, portable restrooms in Tompkins County is serviced by The Drain Brain.  Our professional and knowledgeable staff will work with you to determine how many units will be needed, arrange delivery to designated areas that will not detract from the event itself.  Be sure to contact us today to reserve the portable restrooms for your next event.

Locally Owned & Operated
Learn More About How a Septic System Works
We provide services to the following areas: